We hope that you’re safe and healthy.

It’s been a minute. Here’s the tl;dr:

When we wrote a few months ago, we had just shipped Model 01 keycap orders and were gearing up for the Keyboardio Atreus Kickstarter campaign.

The campaign went pretty well: We ended up selling more than 2500 Keyboardio Atreus keyboards, along with a whole slew of travel cases and walnut palm rests. We’ve already shipped out about 150 “early delivery” keyboards and are on track to ship all preorders in August. If you haven’t ordered yours yet, now is the time! The coupon code JULY2020 will take $15 off the cost of a Keyboardio Atreus. If you order now, your keyboard will be in the first mass production run, which we expect to ship in August. 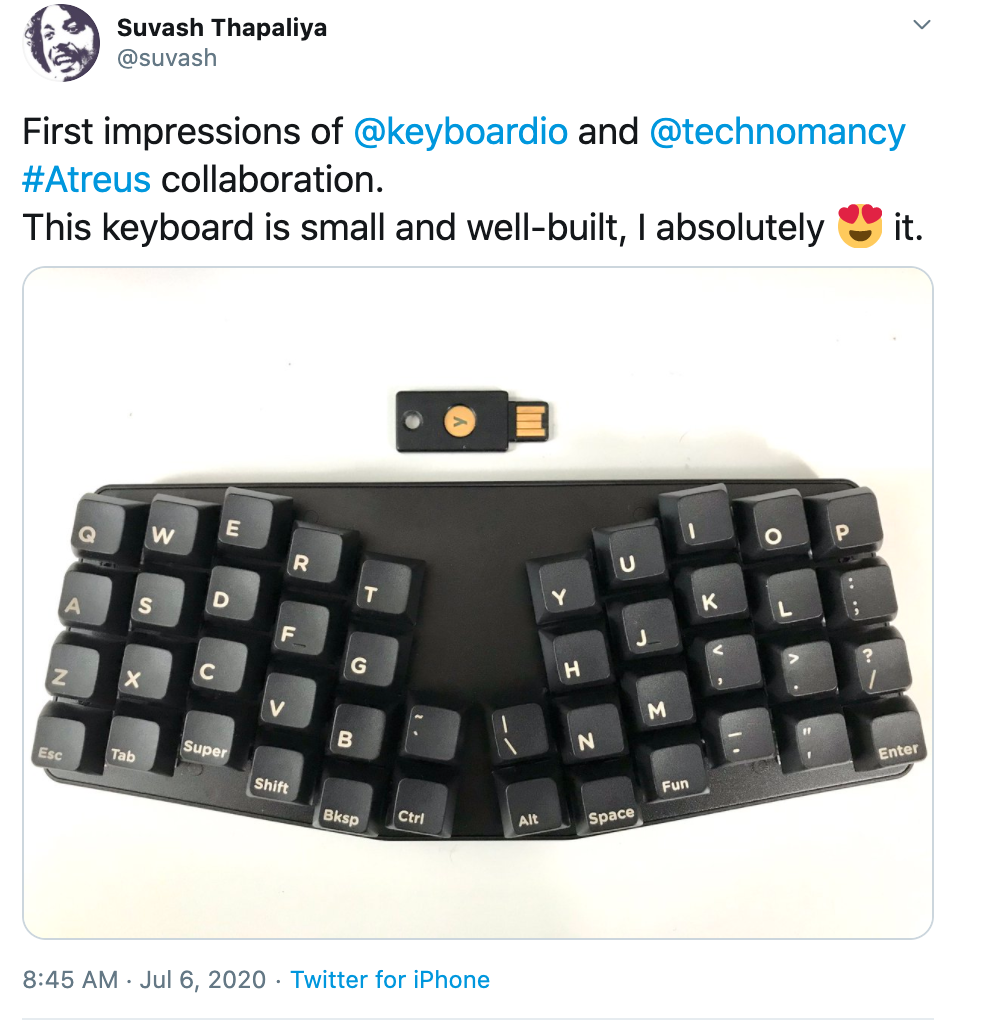 One of our early-delivery Keyboardio Atreus units

Earlier this year, we sold out of Model 01 keyboards. We kept a small handful of units in reserve for warranty replacements, but other than that, the Model 01 is sold out forever.

We love the Model 01, but it was time for some design updates. We’ve been working with our factory to bring the layout and keycap shapes of the Model 01 to a new keyboard that incorporates everything we’ve learned about manufacturing over the last five years. That keyboard is the Model 100.


Some of the biggest changes from the Model 01 won’t be visible from the outside of the Model 100. We plan to use hot-swap “MX” style switches, though we haven’t settled on specific switches yet. This will allow owners of the Model 100 to choose from a greater variety of switch types and even change switches (say, from clicky to quiet) on their own, without needing to pick up a soldering iron.

We’re also using a different kind of LED inside the keyboard. They’re much, much more energy efficient and shine upwards from the bottom of the circuit board through the switches. We’ve moved almost all of the electrical components to the bottoms of the circuit boards to make maintenance and assembly easier. 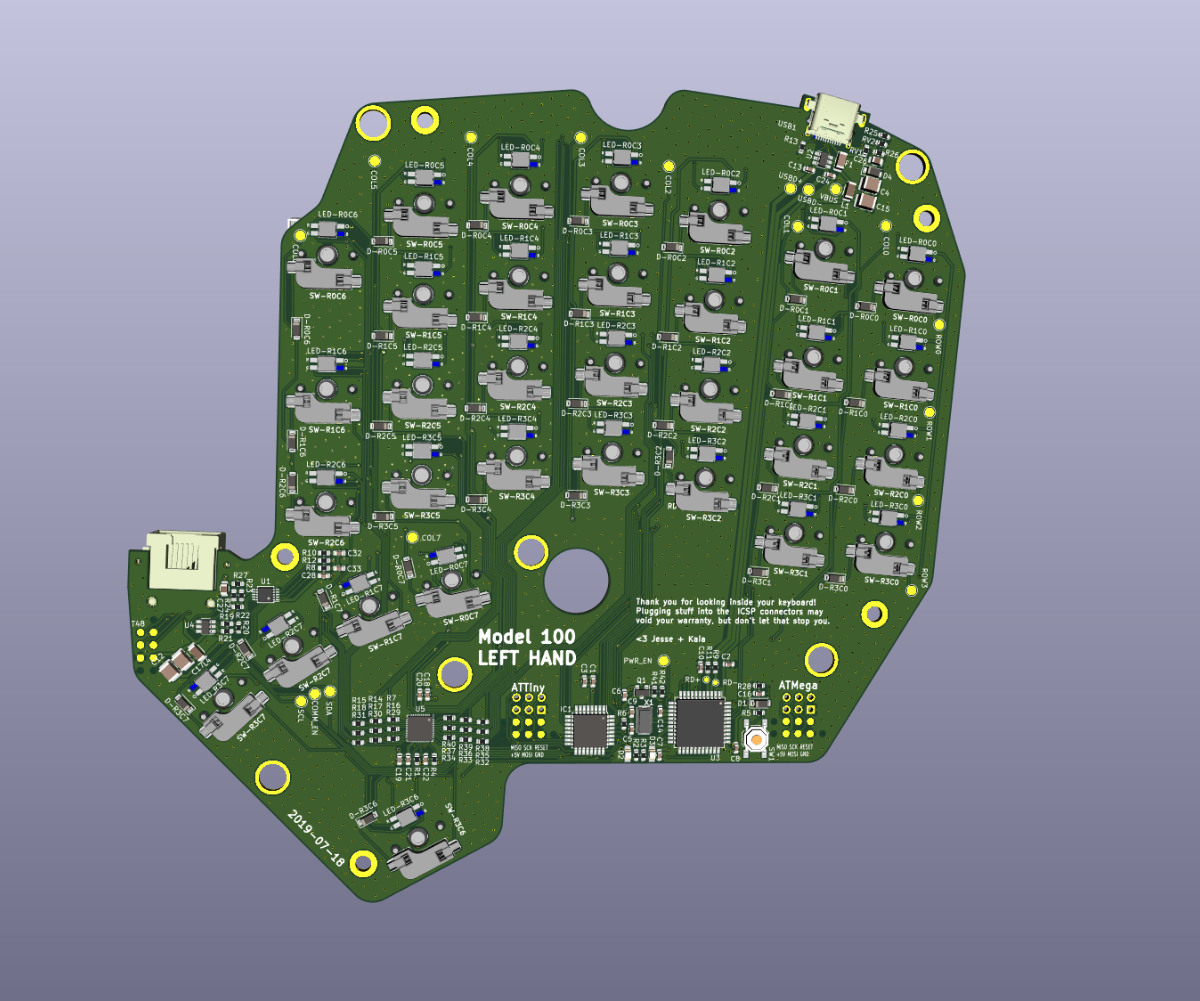 Underside of the Model 100 circuit board

The keycap shapes are almost final: they’re essentially the Model 01 profile with a few tweaks and a revision to have MX keystems.

The update to the stands is just about final.

To do a mechanical fit test, the factory 3D printed samples of the baseplate and keycaps for the left side and had an aluminum key plate laser cut. They had us order them bare PCBs and then assembled the “big” components to make sure that everything lined up correctly and fit well. The results were good, but just afterward, the factory flagged a possible supply chain issue that’s caused us to do a minor design rev to the circuit boards. We’d thought the boards were good to go, but the factory discovered that the USB C connector we’d chosen for the Model 100 has recently been marked by the manufacturer as “not for new designs.” In short, that means that while it hasn’t been discontinued, they intend to stop making it at some point in the future. So we’re switching back to the connector we used in the Model 01. This ends up having a ripple effect. Since the height of the USB C connector is changing by about a millimeter, the design of the plastics for the left side’s baseplate needs to be adjusted to move the hole for the USB connector by a millimeter. It’s not a huge undertaking, but we’re glad we caught it now.

We’re currently waiting on the wood supplier to make a sample of the updated wooden enclosure to make sure everything fits together.

Once we’re sure everything looks correct on the left side, the factory will mirror the mechanical design updates over to the right hand side.

After we sign off on the mechanical design and fit, the factory will start work on the tooling updates. It looks like we’ll be able to update the tooling for the stand, plastic baseplates, rails and connecting bars. The old keycap tooling, on the other hand, is a write-off. We’re going to end up needing to do new keycap tooling from scratch.

We haven’t yet started looking at cables, packaging, the manual, the layout card, or key legends, though all of those can go pretty quick.
One thing we’re thinking about right now is colors, materials, and finishes. We’re strongly leaning toward making walnut the default wood for the Model 100, rather than the maple we used for the Model 01. We love the look of the walnut on the Keyboardio Atreus palm rests and the wood CNC factory say that we’re going to end up with much more reliable results if we mill from walnut instead of maple. Along with that, we’re contemplating whether we want to use the same “paint + laser engraving” technology we used for the Model 01’s keycaps. We haven’t talked in detail to the factory about this yet, but we’re contemplating asking them about doing smoky translucent keycaps with white laser engraving directly on the plastic. If it ends up possible, we think it might end up looking gorgeous, whether or not you have the LEDs turned on. But more on that front in a later update.

We don’t have a firm launch date or price for the Model 100 yet, but we’re working hard to launch it before the end of the year.

We don’t currently have Model 01 travel cases in stock. Our entire remaining stock of travel cases was lost by our US fulfillment provider. In late March, they notified us that their fulfillment business had been acquired and that we had five days to recover our stuff or they would ship it to the acquirer’s Kentucky warehouse. As it turns out, we didn’t have five days. Even before they notified us of the change, they’d closed the warehouse our stuff was in. They told us that our inventory was on a truck to Kentucky and that it might be 30 days before it was available to ship. 30 days came and went and …no stuff. Eventually, they admitted that they had no idea where our stuff was and refunded us the wholesale value of the inventory. Talking to other customers and former customers of this provider, we ended up pretty lucky. Other folks have told us that they are still waiting on hundreds or thousands of missing units.

Like every business on the planet, COVID-19 has affected our operations. We’re relatively lucky in that the big issues we’re running into aren’t existential threats. They just slow us down and drive up our costs.