(This post originally appeared on Jesse’s personal blog in December 2012.)

I’ve been typing since 2rd grade or so, when my parents bought an Apple ][e. I started taking notes on a laptop in 8th grade. I tried to take a keyboarding class in 9th grade, since I’d never learned to type properly. Unfortunately, I typed well enough that I actually got kicked out of class.

These days, I spend a lot of my time writing software. When I’m not doing that, I spend my time making trouble on the Internet. To say that I spend much of my time at a keyboard would be somewhat of an understatement. 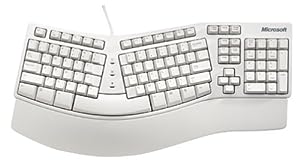 For many, many years, I was a happy user of the Microsoft Natural Elite keyboards. I say “keyboards” rather than “keyboard” because that particular model is…somewhat inexpensively constructed. It’s the only keyboard I’ve ever met with water-soluble traces. That is to say that getting even a small amount of moisture into it would result in permanent hardware failure. Its saving grace was that replacements were cheap. Particularly if you bought them in 5-packs. Attempting to find a reasonable link to Amazon, it appears that these keyboards may finally have been discontinued.

I was visiting family during the week between Christmas and the New Year - and ran across this post by Jeff Atwood on the Keyboard Cult. From there, I found my way to geekhack.org and eventually to deskthority.net.

It turns out there’s a huge keyboard otaku subculture. People fetishize their favorite obscure keyboard or hyperoptimized key layout. I’d like to claim that I mined their FAQs for recommendations and went on my merry way. But I can’t. I got sucked in. I spent months learning about keyboards. In my bid for typing nirvana, I’ve amassed a fair collection of obscure keyboards. Some of them could easily be mistaken for “normal” keyboards but feature interesting keyswitches or some specialized bit of technology. A few of them are genuinely special. Early this spring, I met a Taiwanese keyboard designer and got to play with his latest prototypes while sitting on the polished marble floor of Academica Sinica in Taipei. What I saw there was one of his designs, the VorTex “Pure” 60% keyboard. I’m typing this on a Pure I cajoled out of him shortly thereafter. The Pure uses brown-stemmed Cherry mechanical keyswitches. Unlike the keys on your laptop or a typical modern desktop keyboard, you don’t have to bottom out Cherry keyswitches. They have a subtle “bump” about 2/3 of the way down as you depress them. Once you’ve felt the bump, you can let go. The keys don’t feel as good as an IBM M-series keyboard, but they’re still so much nicer on my hands than most of what I’ve been typing on for the last several decades. The Pure is what’s known as a “60%” keyboard - It has full size keys, but is 60% of the width of a standard 104-key desktop keyboard. It doesn’t have a number pad or a separate section for arrow keys. (If you want arrow keys but no number pad, you’re looking for a “tenkeyless” or “TKL” keyboard.) The Pure, like the Happy Hacking, puts many of the keys you’d normally reach for on a second layer you access by holding down a function key. For example, the arrows live under the O/J/K/L keys. Because many of today’s high-quality keyboards are targeted at the gamer market, they have a few features that I’d ordinarily pass on…but secretly enjoy. For example, my Pure has a mode where every single key is lit up with a purple LED backlight. The Pure is a damn fine keyboard. And Justin, its designer, is hard at work on what sounds to be an even nicer successor. But it’s not quite my ideal keyboard. Its layout is startlingly traditional and, like most keyboards, forces my hands to contort in a slightly unnatural way as I type.

Sometime in May or June, I hunted down a 20-year old IBM M-15 adjustable split keyboard. The M-15 is just like those big old IBM keyboards that sound like machine guns. Except it’s split down the middle – held together with a ball joint that lets you set the two halves at whatever angle you want. You can split it like a butterfly. You can tent the two halves. With a couple more turns of the knob, you can actually split the two halves and type with your hands in much more natural resting positions. It feels stellar to type on, but it’s loud. Loud enough that you can’t use one in public. It’s also heavier than my laptop. (Admittedly, I have a very light laptop.) It’s also nearly unobtainable - They only made it for two years in the mid-1990s and it wasn’t terribly popular. When it was new, you could buy one from IBM for $179. These days, the few used M15s that show up on eBay sell for between $400 and $900.

In September, I found myself on the 14th floor of a Tokyo office building paying rather a large amount of cash for an incredibly obscure µTron ergonomic keyboard. The µTron is the most lovingly designed keyboards I’ve ever seen. It uses the same Topre keyswitches as the famous Happy Hacking keyboard. Unlike the HHKB, it’s got a split “symmetric” staggered layout that’s much less harsh on your left hand than the keyboards you’re used to. It adds a few extra keys designed to be pressed with your thumbs. The thumb keys have sculpted edges – The keys you hit on the side have sculpted sides. The keys you hit from the bottom have gently sloping bottom edges. The keys you hit at an angle have a gentle slope originating _on a corner_. When I asked why the µTron is so hard to buy - Why it’s not really sold in stores or outside Japan - the answer I got back was a nice formulation of Catch-22: “Well, it’s very expensive because it’s not mass-produced, so not many people will buy it.”

I’ve skipped over the Kinesis, the Maltron, the Access-IS POS keyboard, the TypeMatrix (which, even before the Coding Horror blog post, primed me to start thinking about keyboards), the TrulyErgonomic, the KBT Race and the KBC Poker. Each is interesting in its own right and each has a story, but none are the story I’m trying to get to. Tune in next time for “How I came to find myself buying keyswitches and diodes in bulk, ordering 3D prints from ShapeWays and learning to solder freehand.”