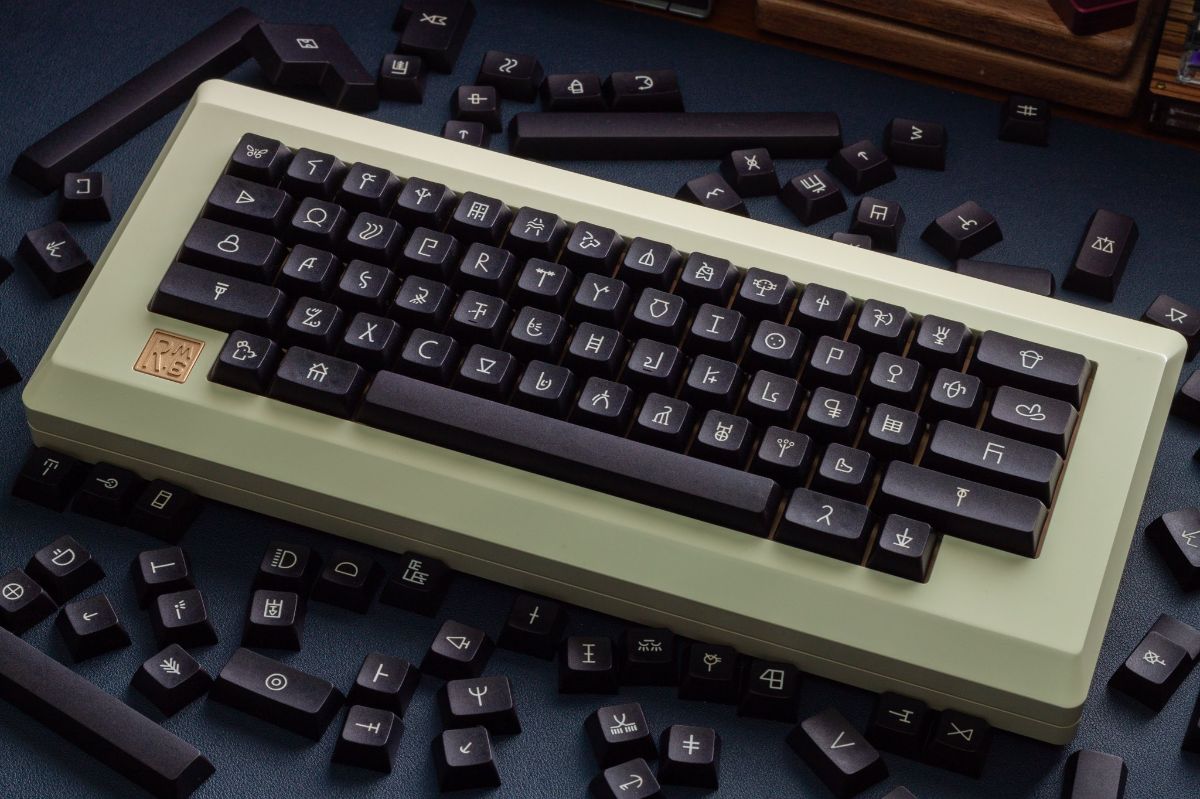 It's been a while since we've written and we've got lots to report. We're getting ready to launch the Kickstarter campaign for the Model 100 (and we need your help). We have a whole bunch of new keyswitch options for the Atreus in stock and ready to ship. Our latest restock from Kailh has arrived and now includes Box Silent and Choc v2 switches. We're now selling keypullers and keycap pullers. And XDA Linear A caps will go on sale next Monday!

The Linear A keycaps we made for the Model 01 have been incredibly popular. We're excited to announce that we've designed and manufactured Linear A keycaps that will look and feel great on the Atreus (or, indeed, on any keyboard that uses Cherry MX style keyswitches.)

These new XDA-profile keycaps are injection molded from PBT, dyesubbed black, and then laser-ablated to reveal warm white legends.

The full keycap set is 132 keys, including five different full-size space bars, ISO and "Big-ass" Enter keys, and a variety of extras.

The XDA keycap profile means each row has the same spherical sculpted top shape. While we've picked out symbols that are reminiscent of the English alphabet, you can rearrange the keys to any layout you choose. Of course, since the ancient Cretan civilization that created the Linear A alphabet vanished thousands of years ago and modern scholars have yet to decipher the writing system, there's no wrong way to arrange these keycaps.

Linear A keycaps go on sale Monday March 15th at 10am US/Pacific. They will cost $80 + shipping.

If you want to be notified when Linear A keycaps are on sale, join the waitlist.

This is not a group buy or a preorder campaign. We have sets of keycaps in stock and ready to ship out.

Model 01 users: we need your help


We're starting to put together the Kickstarter campaign for the Model 100. While we can talk about our keyboards until the cows come home, we'd rather let you tell new folks what you think about your keyboard. We'd love to feature some quotes from you in the campaign. If you type on a Model 01, we'd greatly appreciate it if you could take a few minutes to answer a brief survey about your keyboard.


We’ve been making steady progress on the Model 100, our followup to the Model 01. This new keyboard will make the change from Matias ALPS-style keyswitches to hot-swappable MX-mount keyswitches. We’ve finalized the mechanical design, with the exception of the keycaps. Based on your feedback, there are a few things we’re changing, but our overall goal is that the keycaps should feel very, very similar to those on the Model 01. To make that happen, we’ve had to make a number of changes to the bottoms of the keycaps.

In addition to using a different shaped ‘stem’ to mount to the keyboard, MX keycaps sit a little bit closer to the keyswitches than ALPS keycaps. At the same time, the shapes of the switches are different, so we need to adjust the keycaps to fit. The new keycaps should be slightly thicker plastic than those on the Model 01. They also won’t extend as far down toward the keyplate, so should end up with a better “glow” under the edges of the keycaps. We’ve slightly changed the shapes of the thumb keys, switched from homing dots to homing bars near the ‘bottom’ of the key surface (like most other modern keycaps), and made the Enter/Tab keys a hair taller, to help prevent accidental keypresses. We’ve been through a few iterations with the factory, but the design of the keycaps isn’t “just right” yet.

We’re planning to change up the materials for the Model 100 a bit. Instead of maple, we’re planning to use walnut for the wooden enclosures. We’re also investigating switching from making the keycaps out of clear plastic, painting them black, and then using a laser to burn off the paint so the legends shine through, we’re talking to the factory about the possibility of injection-molding the keycaps from a dark “smoky” plastic and then laser-engraving white legends. If this works, the keycaps will be able to do a much better job of showcasing the Model 100's LEDs when you want to and still having clean readable key legends when you don’t.

When we launched the Model 01 Kickstarter, we tried hard to specify the keyboard’s electronics as precisely as we could. We quickly learned that by making clear, definitive statements, we’d boxed ourselves in a bit. When we had the opportunity to make design improvements before the keyboards shipped, it felt almost like we were going back on our word, because we were changing the specs we’d committed to. This time around, we’re hoping to be less definitive about parts of the design that we think there’s a reasonable chance we’ll be able “overdeliver” on. One great example of this is the microcontroller that powers the keyboard.

On the electronics front, we have working prototypes of the Model 100's electronics which have passed FCC pre-testing. We believe this design would be shippable as is, but are working in parallel to see if we can sneak in some improvements without slipping the rest of the schedule. That might mean that when we go to Kickstarter, we’d say something along the lines of: “The Model 100 may ship with the same Microchip ATmega32U4 microcontroller that powers the Model 01, but if it’s possible for us to do so without slipping the schedule, we may upgrade it to a more powerful microcontroller at no extra cost to you.”

We may or may not have the Model 100's tooling design 100% nailed down before we launch the campaign, but believe we’re getting pretty close on that front. If you were around for the Model 01 campaign, this puts us very, very far ahead of where we were when we launched that first Kickstarter. 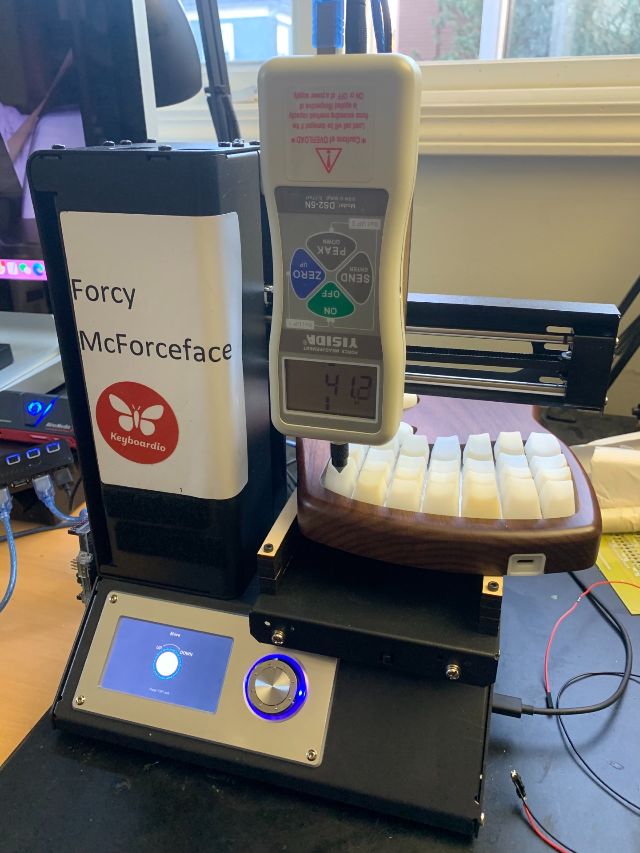 We now stock premium Keyboardio-brand keycap and keyswitch pullers. The two come packaged as a set for $5. As you might imagine, we've tried a lot of different designs of pullers over the years, and these are our favorites.

You can always find a list of all of our in-stock switches with current pricing at https://shop.keyboard.io/collections/switches-and-sockets 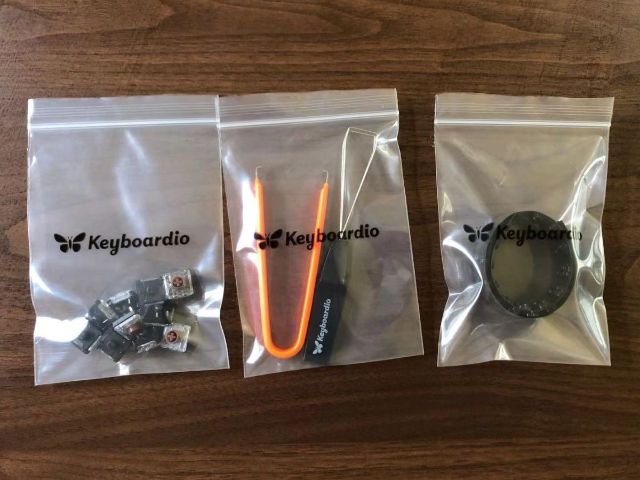 Also, for the first time, we're offering Atreus keyboards with Kailh BOX Silent Tactile and Kailh BOX Silent Linear switches. These switches feel great and have been specially engineered to be whisper-silent.


Build your own Atreus

We also now offer a "bare bones" Atreus without caps or switches pre-installed.  We sell you the circuit board and enclosure, and you add 44 MX-mount switches and 44 1x1 keycaps of your choice (sold by us, or not).

If you haven’t ordered a palm rest yet, they’re now in stock and ready to ship on our website.

Reports from the field

Atreus customer reports from the field have generally been very positive. Overall, we’re quite pleased with the build quality. We’re always looking to improve, however, and have included details here in case you’re interested.

There are just two issues we've run into that require any significant corrective action.

We've seen a handful of keyboards from the first production run with a soldering problem that resulted in keys in two columns being bridged together. We've ended up replacing these keyboards under warranty. The factory tracked this down to a short circuit underneath the ATMega32U4 chip that controls the keyboard. Going forward, the circuit board assembly supplier will be paying additional attention to this failure mode and the keyboard factory has revised their Atreus testing software to explicitly test for this problem during quality control.

The other issue we've run into is that a small number of BOX Brown switches shipped in Atreuses are extra-sensitive. This manifests as the keys acting like they've been pressed when they've just barely been touched. The immediate fix is easy: Since the Atreus uses hot-swap sockets, you can change out switches at home without soldering. We've been sending care packages including replacement keyswitches and key pullers to customers who've run into this issue.

The long-term fix is a bit more involved. Talking to other keyboard manufacturers, this failure with BOX switches isn’t entirely new. One manufacturer has been hand-screening all their keyboards for this defect for a few years now. Our factory has updated their QC procedures to test for the issue, but we really wanted to get to the bottom of things, so we asked the switch manufacturer what went wrong and how we can make sure this doesn’t happen again.

Once we'd identified the problem, our factory delivered a keyboard with a defective switch to Kaihua, who makes the switches we use. A few days later, Kaihua sent us an official investigative report, including the corrective actions they will implement going forward. They’ve made a change to the design tolerances for BOX Brown (and similar switches) and have updated their internal testing regimen. While we never like to ship anything less than perfect to you, we’re very satisfied with Kaihua’s handling of the issue.

If you think your BOX Brown Atreus has a bad switch, please don’t hesitate to reach out to us at help@keyboard.io.

Our factory confirmed with Kaihua that it was ok to publish their corrective action report for this issue. We then had it translated into English. Out of respect for privacy, we have blacked out the names of the Kaihua staff involved. 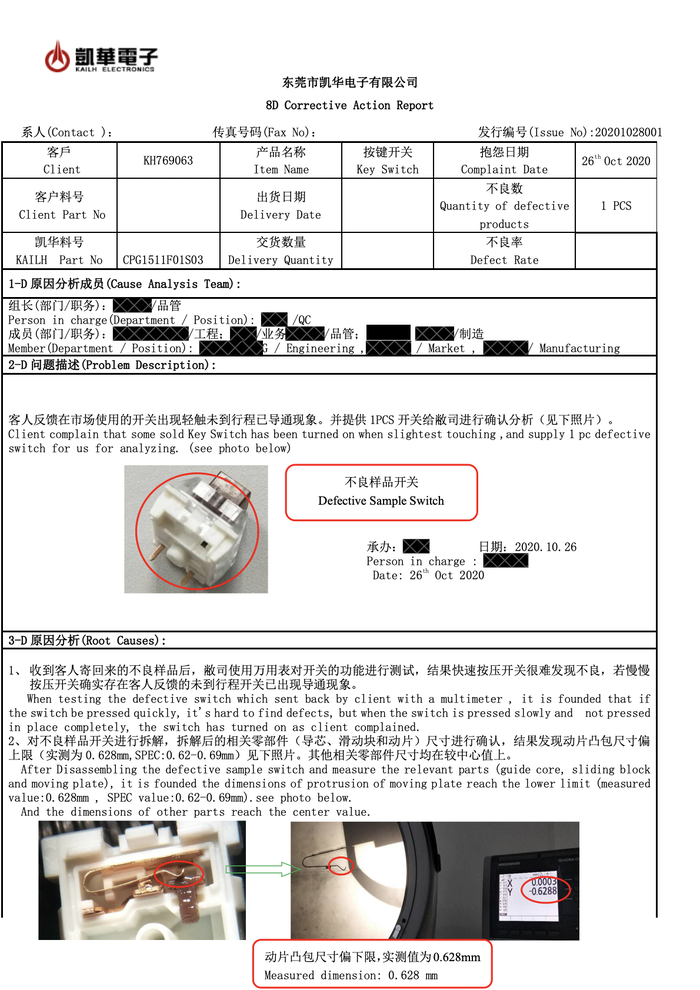 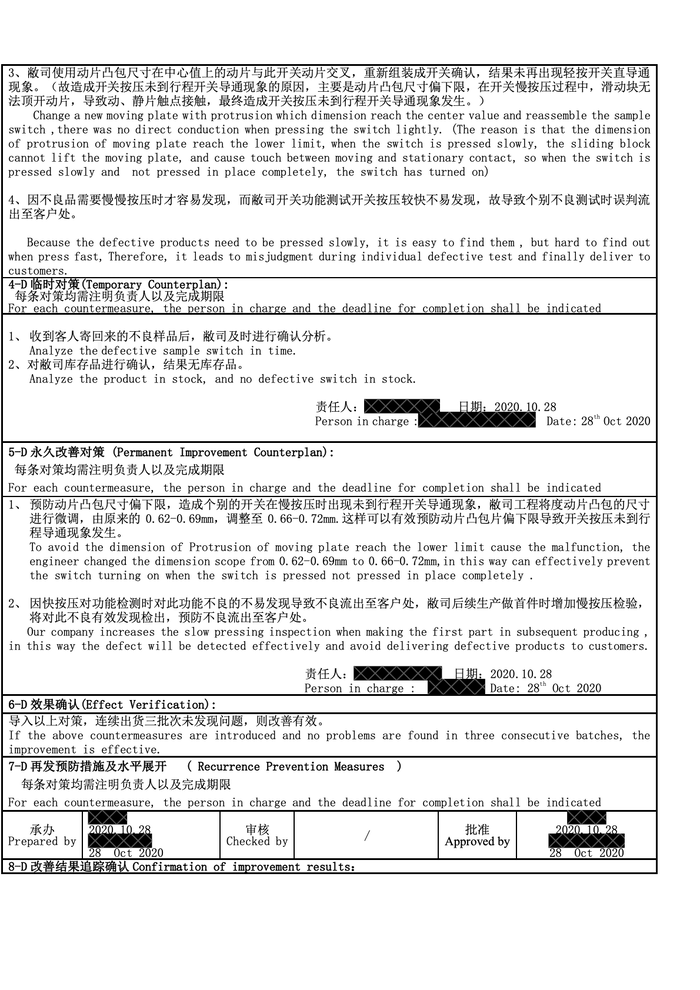 What’s more, discordia took the time to write a full HOWTO and to publish it to hackaday. Check it out! 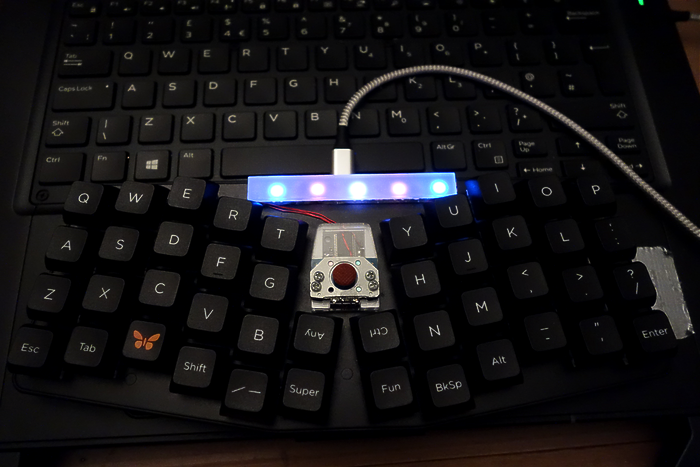 This next hack doesn't void your warranty, but we love it too. Alex Young / @regularfry uses his Atreus with a Thinkpad, and designed and 3D-printed risers so that you can put the keyboard over the laptop keys without pressing them down. He's released the design under a Creative Commons BY-NC-SA license, so you're welcome to remix it and print your own to fit your laptop.

Keyboards are personal tools, and no one layout is perfect for everyone. One of our favorite things about the keyboards we make is that you can customize their layouts to work the way you do.

Since we last wrote, we've been busy making and shipping updates to Chrysalis, our graphical configuration tool. It should be significantly more user-friendly. The latest releases (0.8.x) feature initial support for non-English layouts and a completely rebuilt keyboard configuration interface.

If there’s something you’d like your Atreus or Model 01 to be able to do, but aren’t sure how to enable it, drop us a line via email or chat about on in our Discord.

We're still seeing longer than usual shipping times due to COVID, though many carriers have somewhat recovered from the worst of what we saw in 2020. Postal shipping options are especially unreliable. Sometimes we're seeing orders fly around the world in a matter of days and sometimes orders are taking upwards of 6 weeks to make it to their destinations.