Over the past couple months, we’ve been thrilled to meet more than a few of you at OSCON, XOXO and TechCrunch Disrupt. When we haven’t been showing off the prototypes, we’ve been hard at work on the last bits of electrical and mechanical design before we go to crowdfunding. We’re getting close enough to start to see the light at the end of the tunnel.  And we need your help with one little thing to get there.

A few weeks ago, we spent a day at TechCrunch Disrupt’s hardware alley. (We weren’t there to fundraise, which definitely confused some attendees.) We showed off a few simple LED animations under the keys of the aluminum prototype we created at Highway 1, along with a pair of flat wooden prototypes: One was the keyboard Jesse’s using day to day. The other was the first public debut of the new keycaps that Taylor Stein at Autodesk has been developing with us in Fusion 360. (Really, when we say “with us”, we mean that Taylor has been designing us keycaps while Jesse’s been sitting next to him saying things like “can you make that bit more curvy?”) We’re pretty happy about how the keycaps are coming out.

We’re inching closer to crowdfunding. It’s definitely been taking us longer than we thought it would, but we’d much rather be late to put the project up than be late to deliver to you. Right now, the biggest thing that’s been holding us back is the enclosure design.

In a previous update, we talked about deciding to try for a sculpted hardwood enclosure rather than the aluminum model we’d shown off at Highway1’s demo day. We spent most of August interviewing industrial designers who could help us turn what we had into something that would look and feel amazing when we mill it out of hardwood.

We had a few false starts, but we’re finally getting somewhere. We’re thrilled to be working with Stopher Christian of Tensen Design. This is a render of Stopher’s current design (with bonus keycap design too): 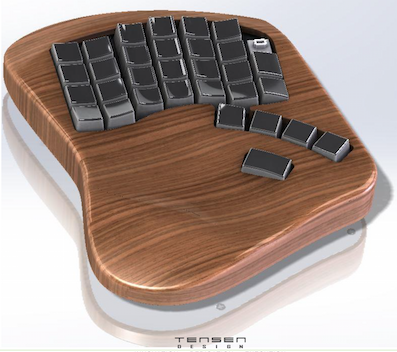 Jesse spent last Friday night learning how to use a CNC mill. His first attempt at milling a keyboard…did not go so well: 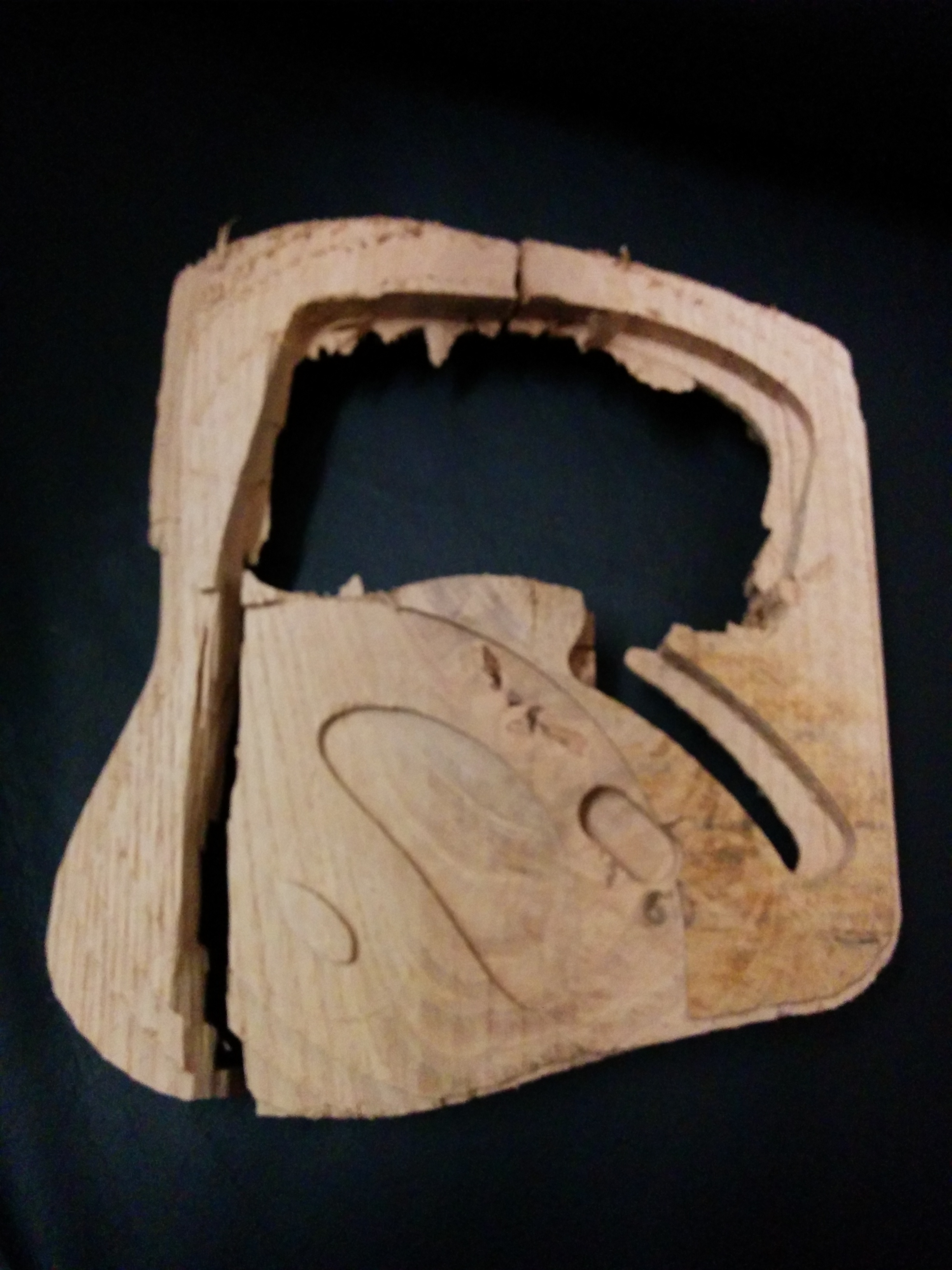 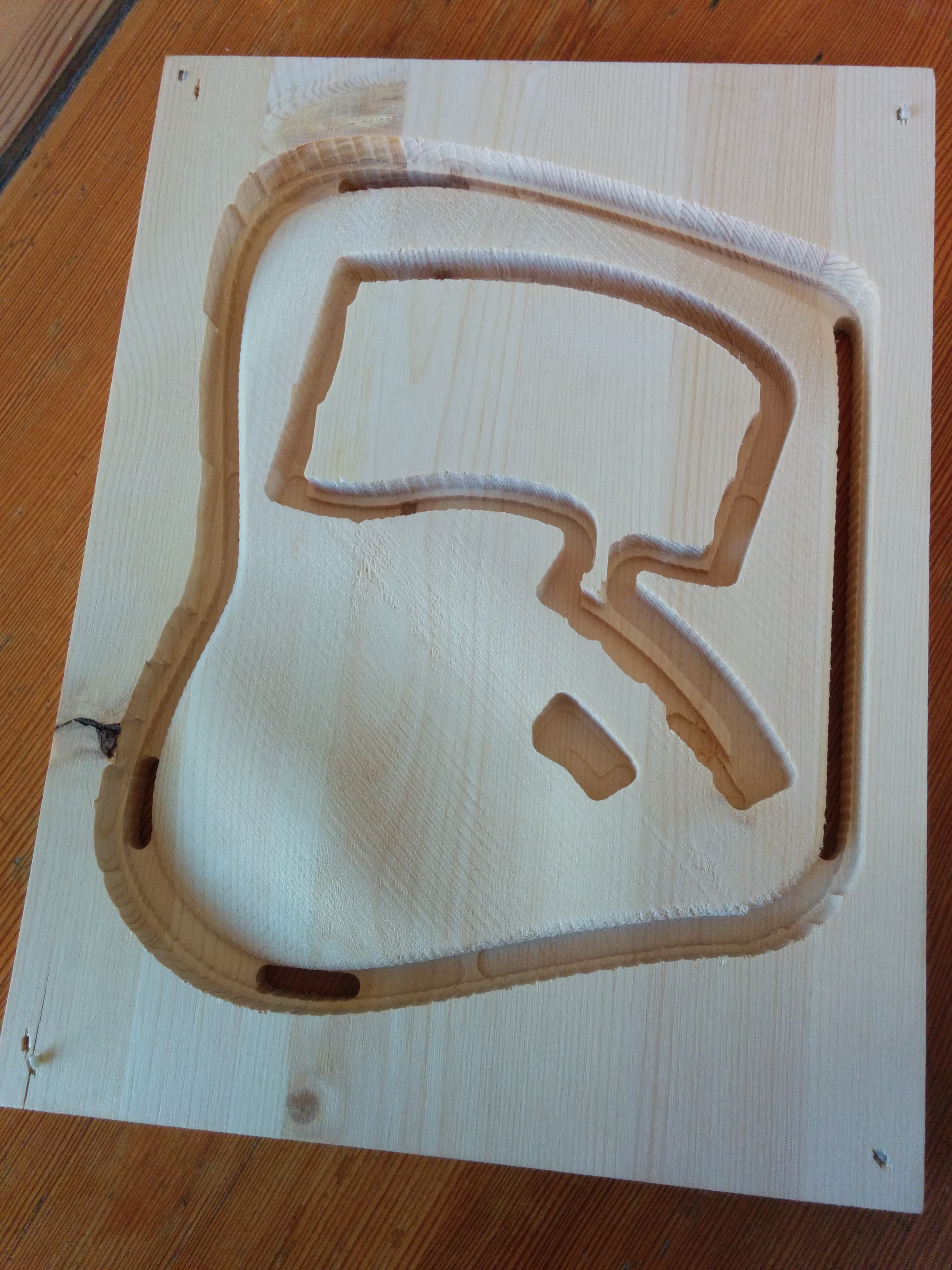 We’ve been pretty public about our design and plans from the get-go. As we’ve designed the Model 01, we’ve made a few course corrections. One of the things we’ve been working on is making sure that we can make your keyboards, sell them for a reasonable price and still turn a profit. There are some aspects of the product that we’re unwilling to compromise on.  And then, there are some things that turn out to cost a bunch of money for a potentially dubious return.

Don’t worry - we’re not getting rid of the mechanical keyswitches or the programmability. At the moment, we have two features we’re changing for the production keyboards.

One of the things we’ve been excited about since the very beginning is building a replaceable/upgradable logic board for the keyboard. The reasons we’ve wanted to do this are twofold. One, it means that it’ll be relatively easy to upgrade your keyboard to a newer logic board if we come up with something cleverer in the future. Two, it means that we’ll be able to make the logic board available as a separate product on the open market for other people to build amazing things with. The downside of doing this is that it adds complexity to the design and introduces yet another potential point of failure. (Connectors between circuit boards are much less stable than individual circuit boards.) Unsurprisingly, adding an extra circuit board into the design also adds cost.

The more we’ve thought about it, the more we’ve realized that making the logic board separable is something that sounds really cool but is of dubious real value to anyone. In the interest of building a more reliable keyboard, we’ve made the difficult decision to integrate the logic board with one of the hand circuit boards.

The second is Bluetooth. When you’re making a million keyboards, the cost of FCC certification for your Bluetooth module is relatively small once you amortize it across the entire production run. When you’re not making a million keyboards, the right thing to do is to buy a pre-certified Bluetooth module. Relatively few vendors make pre-certified Bluetooth Classic modules. Even fewer make Bluetooth Classic modules that are hacker friendly. Like most markets with few options, the costs are relatively high. Bluetooth Low Energy (BLE) is a simpler, more modern version of Bluetooth..and far more vendors are making pre-certified BLE modules. So they’re much less expensive. They also happen to use less energy. If we build in BLE, we may be able to shave as much as 25 dollars off the price of our keyboards. And they’ll last longer in Bluetooth mode. They’ll work well with most of the devices you’d want to connect them to: iOS devices starting with the iPhone 4S, most Android devices running 4.3 (Jellybean) or newer, Macs introduced after mid 2011 and recentish Windows machines.

The more we talked about it, the more we realized that we mostly wanted Bluetooth for use with tablets and phones. So,we’re going to run with BLE to save everyone a few bucks and improve battery life a bit.  Of course, the keyboards will still work (and charge) over USB as well.

It’s getting down to the wire, but we’re still hoping to launch a crowdfunding campaign this year. We’ve been talking to friends at crowdfunding sites and it sounds like the week after Christmas is a pretty horrid time to be running a campaign. So, if things slip even a couple weeks, it’ll probably make sense to wait until early 2015. We’re doing everything we can to get your keyboards designed and up for sale as quickly as possible. It’s definitely taking longer than we thought it would, but we think you’re going to be thrilled with the result.

Right now, it’s looking like we’ll be doing a VERY short run of keyboards before we go to crowdfunding. Other than being USB only, they’ll be fairly close to what we expect to produce. Most of them be loaners for reviewers who are as obsessive about keyboards as we are.  Is there a journalist or blogger we should have on our short-list of potential reviewers? We’re looking for folks who are both well known and passionate about keyboards. Please tell us!

We’re considering selling a few of these prototypes to help defray the costs of the run. They’re going to be very, very expensive. Probably about $1000-per-keyboard expensive. If you think that you might be interested in one of these keyboards, please drop us a line at founders@keyboard.io. If you’re willing to hang on a while longer, the production keyboards will be much, much more affordable.

Atreus and cases are now in-stock for live shipping!
September 30, 2020